It’s currently the summer holidays so I think it’s the perfect time to look into opportunities for September either for kids or for yourself, so I thought I’d talk a bit about my time in Scouts so far as both a youth member and an adult volunteer. Yes, I’m probably a little bit biased, but I can genuinely say that I don’t know where I’d be without it.

I joined the Cub Scouts when I was 10 and I was the only girl in my pack at the time (and was then the only girl Scout a year later) because some of my friends were in it and I fell in love with it. I was one of those kids who thrived on reward, so getting badges was my favourite thing, and I just enjoyed having friends somewhere that wasn’t school. To be honest, that’s a bit of a lie – I still thrive on reward and I still love getting badges, although as an adult you don’t get half as many!

Scouting has seen me at my worst and at my best, because it’s been one of the only constants in my life over the last 8 (nearly 9!) years. It saw me through when my best friend passed away; during all my symptoms of chronic and mental illness and this year they’ve celebrated how far I’ve come. My group have done everything they can to make as much as they can accessible, and I’ve had so many cool experiences.

The main campaign for Scouting at the moment is #skillsforlife and I’ve gained so many skills. People think of Scouting and just think of skills like map-reading, pioneering and things like that, which I have learnt (and still fail at), but it’s more than that – leadership and communication and trust. I’ve achieved my Silver Duke of Edinburgh award and I’m on my way to Gold and becoming a Queen’s Scout, which has been my goal since I was a much younger Scout.

The opportunities I’ve been offered have been incredible. I’ve been in Gang Show twice – a Scouting variety show happens all over the country – performing for a week each time in a proper theatre. Last year I went to Belgium and went to several of the war memorials for the anniversary (and a chocolate factory, so my ultimate goal now is to be a chocolatier), and next year if all goes to plan I’m going to Canada.

But apart from these big experiences, there’s the weekly meetings which are just as important to me. I was a Young Leader for two and a half years, and in September I’ll have done a year of service as an adult. I’ve run several badges with the Cubs – Chef, Disability Awareness, Scientist – and I like to think I’ve made an impact on some of their lives, even if it’s just one thing they’ve picked up along the way.

Scouting is absolutely my second family, and I don’t know quite where I’d be without them. I’ve loved every camp, every experience and I honestly think that every child should have the opportunity to be part of an organisation like it – Scouting, Guiding, Cadets or anything else. It gives kids skills that they won’t learn in school, and experiences they probably won’t find anywhere else. It’s fun, it’s challenging and it’s a family. If you’re an adult, I’d 100% recommend getting involved as a leader – it’s so fulfilling and you’ll be changing the lives and mindsets of so many kids.

You can find a group in your local area if you click here. Pop your local group an email and I’m sure they’ll welcome you in with open arms! And if you’re not convinced by me alone, there’s plenty of testimonies available on the website too.

One thought on “What has being a Scout done for me? | scouting” 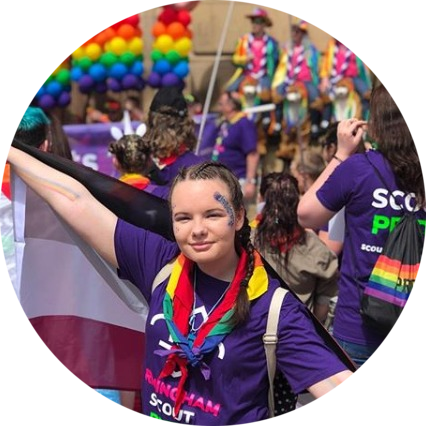 I’m Charli – a disabled nine teen year old, activist, mental health advocate, Scout and theatre lover. I talk about all of these topics as well as equality and politics.

I am also an #iwill Ambassador and part of the Scouts UK Community Impact Group.

Thank you for visiting my blog!